I decided to look at some basic stats from last four Championships* (incl. this year´s) and compiled so called „PDO chart“ (calculated as shooting % + goalkeeping %) for four teams mentioned above. Let´s have a look first.

*There are no shots data found for WFC before 2010.

In the chart we can see Sweden is pushed to the right side. This means their goalkeeping efficiency has very good results (you need more shots on them to score). Additionally, in 2012, Swedish offence was deadly, scoring on a record  rate of more than 37%.

Only Finland in 2010 equaled Sweden in goalkeeping efficiency values. Finland is usually above average in shooting percentage values.

Switzerland represents itself with a solid shooting percentage and poor (in comparison only) goalkeeping percentage.

Czech Republic has usually problem to be efficient in shooting, their goalkeeping numbers are solid.

Two basic questions can arise looking at the chart. The first is:

The chart helps us to recognize the best country in floorball, right?

Yes, ability to score and prevent goals on high rates belongs to best teams and it is showing year by year (and not only on the WFC).

But is there something more? Look at the second question:

How is it possible that Finland was so bad in 2012? The answer lies in what we already know about PDO. In the NHL (the best hockey league in the world), PDO chart is used mainly as an indicator of luck. In other words, it was researched that the most significant predictor of PDO is uncertainty or simply „luck“. It is good to have in mind that the NHL is pretty competitive league with no big differences among teams (unlike floorball). You still find some better PDO teams over time in the NHL with good shooters and golatenders but these values does not go outside 98 and 102 interval per season. What makes the PDO value to be extreme is lack of data, in other words not enough games. PDO over time converges to the value of 100 with certain variability (can be assigned to quality of teams). On tournaments such as World Floorball Championships, lack of data problem is always present. Knowing all of this makes me feel confident saying 2012 Finnish flaws was influnced mainly by lack of luck.

Following table helps us interpret what we see in the 2016 World Floorball Championships so far. 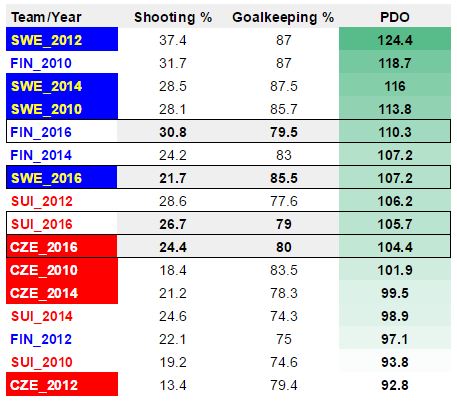 PDOs of Sweden and Finland are not on all time high values this year. Czech Republic and Switzerland are doing good but the hard stage is still ahead of them (Play-offs) so it will be interesting to see if they can maintain their rates. Will they need any luck to beat their Scandinavian opponents? Most probably yes.