You probably know it yourself. The game ends and following stats are shown to you:

TV reporters might comment on how the home team deserved a better fate due outshooting its opponent.

What if the away team scored early and led throughout the game? Would it impact „shots on goal“ stats and its quality? Oh yes, it would. This article attempts to explain what usually happens when one team gets to the lead. It uses data from Czech top men league (Extraliga) and compares them to findings from the NHL. Sounds aight? Let´s go then.

What actually are score effects?

Team with a lead often goes into a defensive shell and purposely withdraw from the possession battle. This increases the frequency of shot attempts for a trailing team and decreases the same for the leading one.

On top of this shot attempts of the leading team are more dangerous (have higher expected goal value) on average than for tied or trailing teams.

This was already proven by data research. You might check one on the Hockey Graphs website from garik16. If you are a fan of even deeper dive into the topic there usually is Micah Blake McCurdy to help. His article about Score sequencing pushes the topic another step forward and to a greater detail.

Anyway I examine the topic on 75 tracked games in Extraliga in the 2020-21 season and I distinguish three different score states:

Overtime and empty net situations are not included for obvious reasons.

Do score effects apply to Extraliga?

Without further talk these are data outputs:

Yes, the „defensive shell“ phenomenom exists also in Extraliga. When the team gets to lead its share of unblocked shot attempts for gets under 50% so the trailing opponent outshoots them. What might be even more interesting though is that the leading team xGF% does not dip under 50%. That means even though the team in the lead is being outshot (46.3%) the total danger still plays in its favor (52.5%).

When the score is tied the average xG value of an unblocked shot attempt is 0.073 (equals to 7.3% chance of scoring a goal). When the team is trailing the xG value is only 0.067. This does not align with garik16´s research though in which danger of an average shot of trailing team is greater than for teams that are tied. When the team is in the lead the xG value is the highest 0.087 (8.7% chance of scoring).

The main reasons behind why the leading team is still stronger than opponent in xG value are „surprise surprise“ odd man rushes. 72.3% of them belong to the team in lead. Without them the xG value of the leading team drops below 50%.

To summarize „score effects“ exist in Extraliga. The outputs align with the NHL research but not fully.

What is this good for?

Well, let´s come back to our initial example. The home team outshot its opponent 29-21 but lost 1-3 while trailing for the most of the game. Is there a better stat that we can rely on if we wanna comment more precisely on what happened on the ice?

Sure, this would be called score-adjusted shot attempts (or shots on goal or unblocked shot attempts which we will use in this chapter). For this you need to know share of time for different score states (ties, in lead, trailing) and our findings (FF% or rates such as FF/60).

If we use score-adjusted unblocked shot attempt differential and calculate the correlation with game results the value increases to +0.43. Check the chart below. 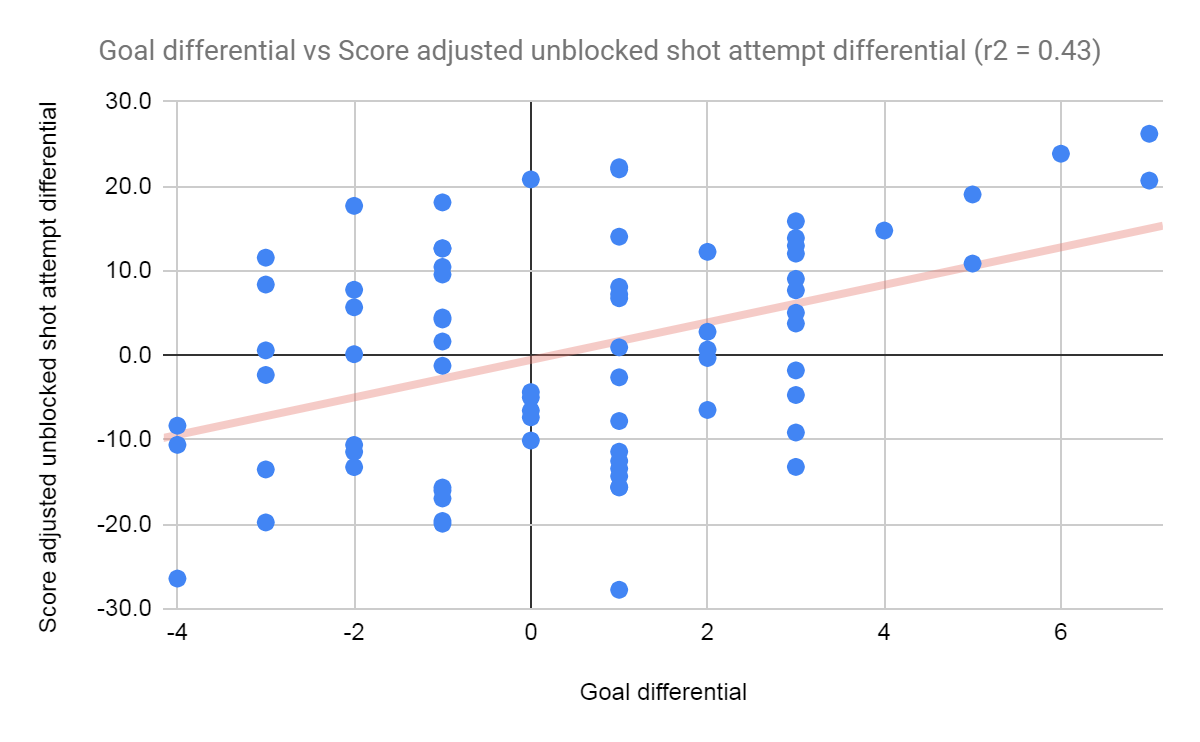 Not the strongest correlation in the world of hockey but the relation exists here. In conclusion when we adjust shot attempt stats according to score we will get better result towards significance for the end result. If you can please, do it.

Apart from game to game analysis it is known that shot attempt differential is a very solid (efficient) predictor of future success. When we take 14 teams in Extraliga in my 10+ game sample for each team and check for correlation of their GF% (share of goals for) and FF% (share of unblocked shot attempts for) the result is +0.60. That is a stong relationships (beware of sample of only 14 teams though). After adjusting for score effects the correlation even grows to +0.71! This is visualized below. 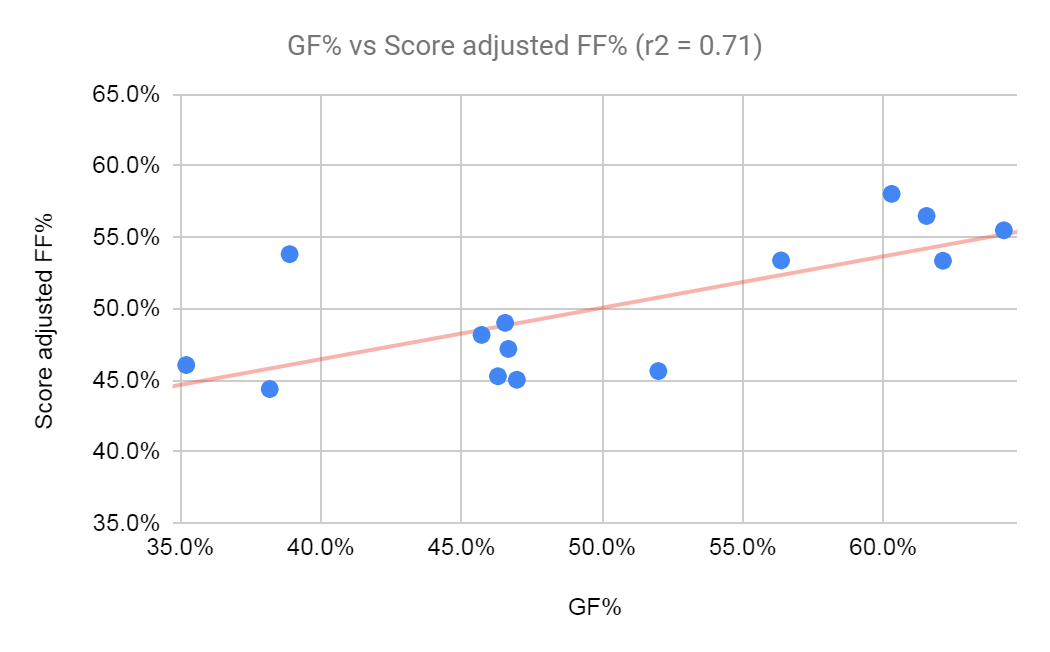 Again if you can adjust for score effects and you will be having better predictor. Even though shot attempt differential is not a self-saving variable to know which team is or will have a success it is still a good predictor especially if you can adjust for score effects. Please, world of hockey, give us time spent in different score states as a basic stat.

Specifics of a defensive shell in Extraliga

Let´s have a look on stats of teams. First graph shows xGF% on a vertical axis and share of time spent when the score was tied on a horizontal one. 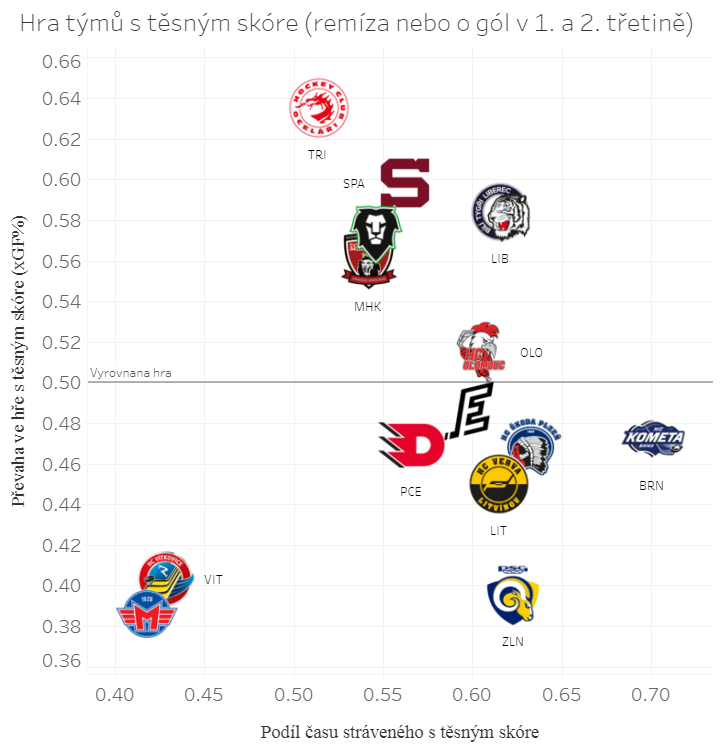 You will find the „big four“ of the league all positioned in the upper section of the graph, namely HC Oceláři Třinec (winner), HC Sparta Praha (semifinalist), Bílí Tygři Liberec (finalist) and BK Mladá Boleslav (semifinalist). These are the strongest teams and when score was tied they played the best hockey of all teams.

Similarly let´s see the a graph for when teams are in a lead. 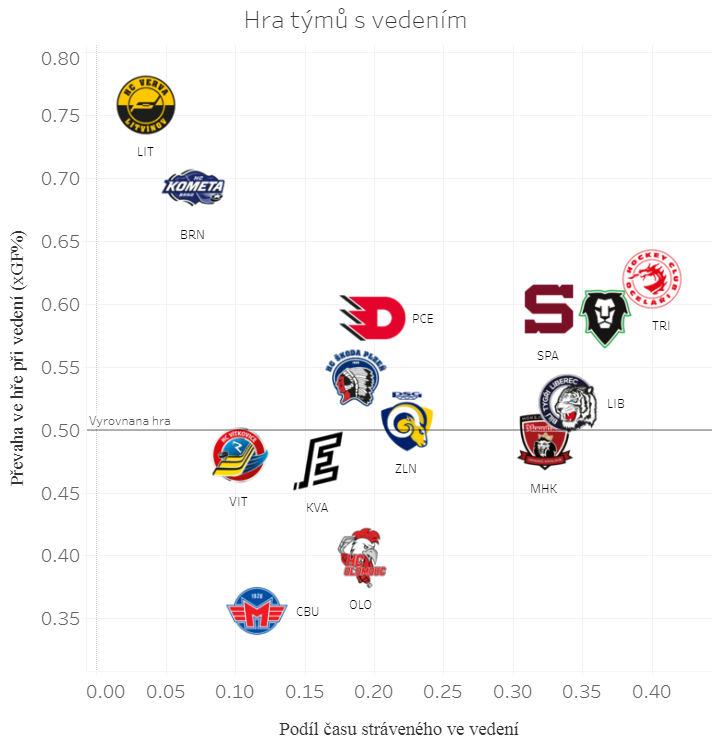 Now focus on the right side of the graph and you will find again the „big four“. Their strong play with a score tied led to them having the lead for the biggest share of time in actual games. It makes sense. On top of that all four teams managed to have their xGF% value above 50%. That is a huge reason of why leading teams had their xG value over 50% overall.

Lastly let´s see how teams did when trailing in games. 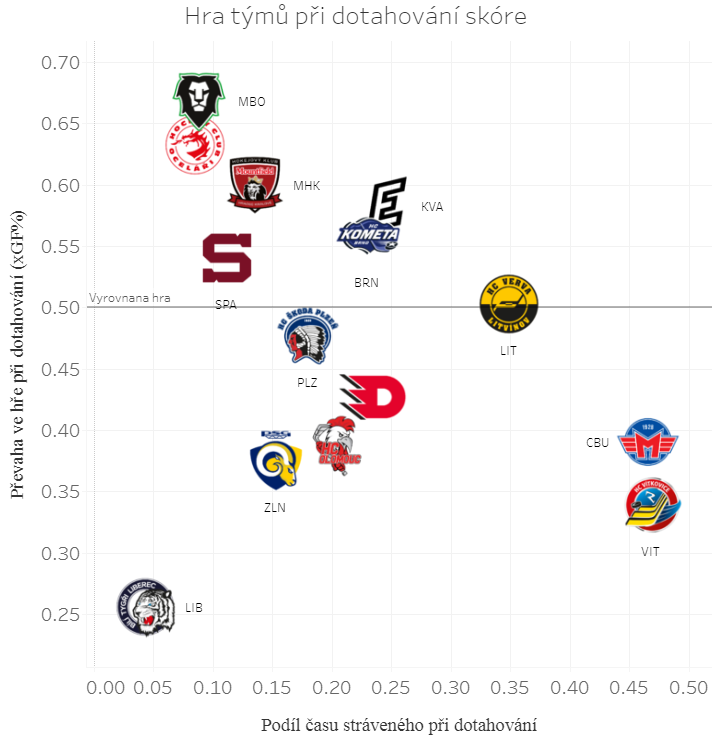 Unsurprisingly it were weaker teams that spent more time trailing including the last placed team HC Motor České Budějovice (CEB). These teams were not able to elevate their game when trailing.

To conclude, Extraliga has its own specifics in terms of team strengths. You should not expect Liberec (one of the „big four“) to go into defensive shell against České Budějovice if they get into lead. Variance in team strengths in the NHL is probably smaller and even the weaker teams have a better chance of coming back (at least in terms of creating more danger offensively) into the game when trailing.

At the same time if we had a chance to remove the Extraliga´s „big four“ the defensive shell phenomenom is totally still in use. Teams with a lead will withdraw that possession battle to some extent. It still makes sense if overall xG decreases in a position when you are up in goals.

Thanks for reading, hopefully some valuable information was delivered to you.